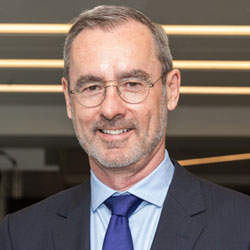 Bill Flanagan is an experienced leader in higher education, currently serving as the President and Vice-Chancellor at the University of Alberta. He joined the university in 2020 and started a five-year plan of academic and administrative reconfiguration. He developed his expertise at Queen’s University Faculty of Law, where he worked for nearly 30 years. While there, he oversaw the creation of the faculty’s PhD program, several online degrees, and an expansion to their business law program. He is also well known for his work on HIV and AIDS research, continuing to serve as the Chair of the Canadian Foundation for AIDS Research’s National Working Group.

Creating real, lasting change is difficult. Any leader will tell you that it’s easier said than done. So many leaders take roles with dreams and hopes of how they would change the system, but many ultimately settle for maintaining the status quo. Making an impact that matters takes determination, vision, and strategy. Few are able to pull it off, but the ones who can often come out on the other side as true leaders.

Bill Flanagan was charged with this task when he came to the University of Alberta. Faced with budget cuts and an institution set in their ways, Bill had to find a path to create real change from the ground up—during a pandemic, no less. His vision is slowly but surely coming to pass, and along the way, he’s learned lessons on how to do this successfully.

In this episode of the Next Wave Leadership Podcast, Dov Pollack sits down with Bill Flanagan, the President and Vice-Chancellor of the University of Alberta, to talk about using technology and communication to make lasting change. They talk about his approach, the new programs he created in his last position, and how to give a voice to everyone. They also discuss the challenges and benefits of virtual education. Stay tuned!